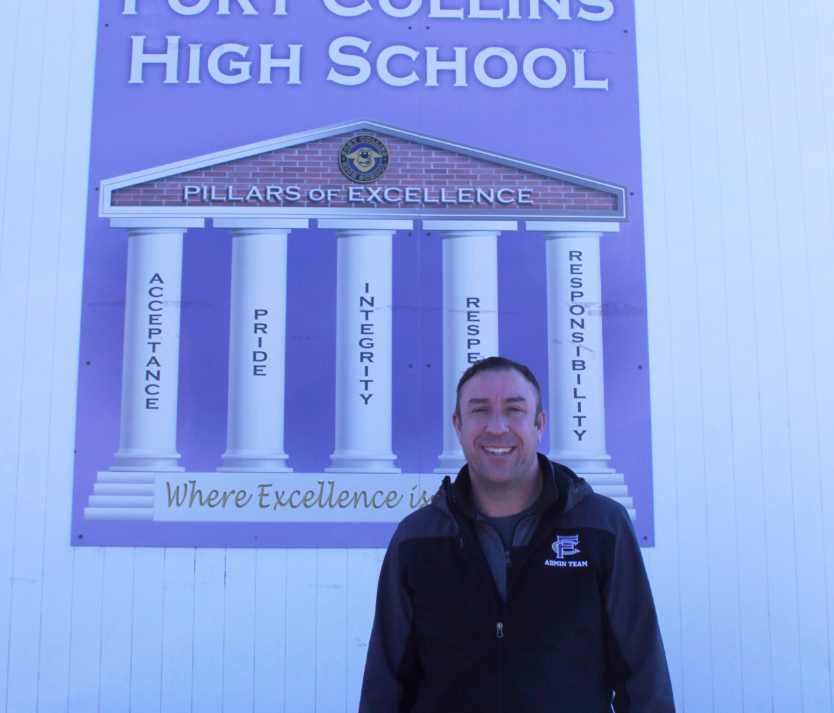 Clyde has always been a symbol of camaraderie and school spirit and a representation of the FCHS community. When he appeared at the first assembly of the year, no one felt the need to question it.

What was questioned was the absence of new Principal Tam Smith, who was not anywhere to be found in the gym.

As the students started to chant Smith’s name in an effort to locate him, encouraged by class president Sam Tollison, Clyde removed his head to reveal that it had been Smith all along. With the costume’s head off, he waved his arms around and the crowd applauded as he fist pumped the air. Into the microphone he held, while gazing out at the huddle of students, he shouted, “Once a Lambkin…” and with no hesitation the group responded, finishing his cheer: “Always a Lambkin!”

Smith took over as principal at the beginning of this school year and has a resolute focus on building a sense of community, which he believes is essential in all areas of life.

Smith has always had a love for community, beginning in the sports field which is where his career began. After his athletic career was over, Smith wanted to find a job that embraced his skills and passions, one of which was working with people. He’d always been interested in education, so he decided to go back to school and give it a try.

“I was very lucky to be fast tracked into principal training programs and did a masters in school administration. I was given the opportunity to lead at a fairly young age and found out that I really enjoyed working with kids and parents,” he said.

Before deciding on education and exploring his love for working with children, he had a variety of experiences all over the world, first growing up in England and then traveling with sports teams he played on. In his life, he has lived in places such as France, Germany and South Africa, as well as traveled to Asia, Australia and many parts of Europe.  During his time back in America, Smith has been quickly adapting to the culture Fort Collins provides.

“This is such a vibrant community. It’s really a fun place to live,” Smith said. “There’s always so much going on. I’ve tried my hand at stand-up paddle boarding at Horsetooth Reservoir to riding my bike down the trails to trying new restaurants and visiting local businesses.”

Smith has been enjoying what Fort Collins has to offer with the companionship of his family, including his wife Nancy, daughter Bailey, son Brody and dog Nessie, whom he calls the true “boss of the family.” He has been spending his time here with them trying new activities, reading, watching movies, playing sports and playing video games.

His strongest focus outside of work is his doctorate, which he is currently attempting to complete and is quite time-consuming.

Like his doctorate, the role Smith is taking over is challenging; it contains multitudes of demands and responsibilities. As principal, Smith must oversee the teaching and learning that takes place within the building and make sure students are provided with the opportunities needed to learn and to grow. He must also help to incorporate the visions the superintendent and the school board have for the school.

However, Smith views the most important thing he can bring to the school as not simply filling those requirements but making sure students feel connected and proud of their school.

“I want it to be clear to the community that I have a love for my job and love for students. I think it’s very important for a principal to demonstrate a love for learning and for community,” he said. “I want to bring a spirit of camaraderie. I want the students and the parents and the staff to feel that they are a part of the process.”

Though the role is demanding, Smith is hoping to bring a new perspective to FCHS, while also being passionate about the job and committed to being the best administrator he can be.

“Being a principal is so time consuming and it’s not a job you can just do half-hearted,” he said. “You have to put all your passion into it. And that’s what I’m doing.”