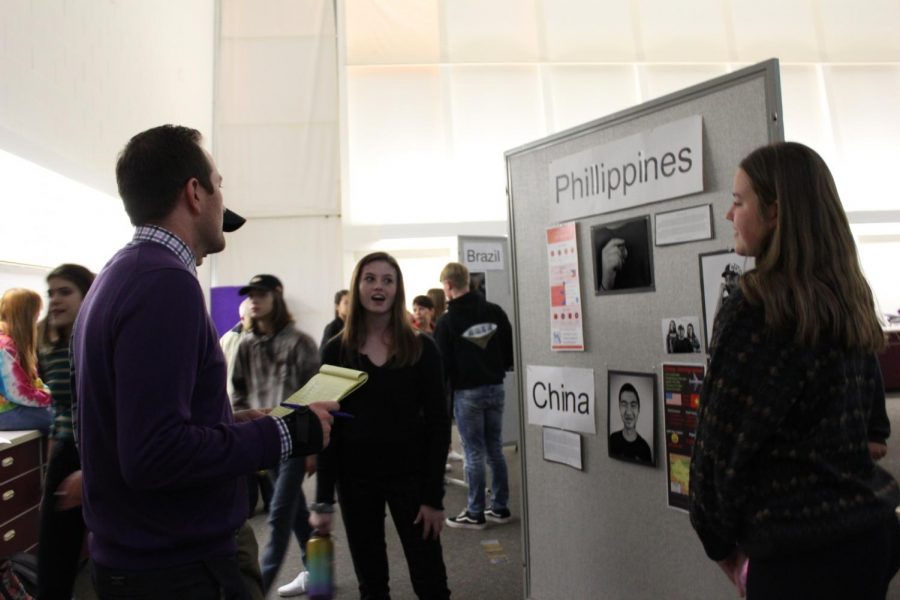 Students Taylor Hixson and Megan Stroik present at the Exhibition of Learning event on Dec. 4. Photo by Sadie Buggle

Immigrants account for approximately 13.6 percent of the U.S. population, according to pewrearch.org. With such a substantial percentage of the population immigrating from different countries to America, it makes sense that Nick Baltzell, teacher of World Geography & Cultures and World Affairs, would feel an increasing need to educate students on this community.

For the past five years, Baltzell has been teaching this subject through a project he calls “Humans of FCHS,” inspired by the “Humans of New York” photoblog created in 2010 that is composed of portraits and interviews collected on the streets of New York City. The project consists of interviewing and photographing a student or teacher who immigrated or whose parents immigrated to the U.S.

“It’s communities like the immigrant community that are oftentimes misunderstood or underrepresented in all aspects of our life, whether it’s in media or government or school,” he said. “This project has evolved to focus more on the humanity aspect of it and how to celebrate that humanity in one another, while also learning some geography content along the way.”

Students were first given a list of subjects they could choose to reach out to in partnerships. They then began the project through interviewing each other over two class periods to develop their interviewing skills.

Last year a Coloradoan reporter came to help students on interviewing, and this year Spilled Ink presented some basics on the topic. After setting up and completing an interview with their subject, students transcribed and analyzed the content they received to create a write-up portion of the project as well.

When writing questions for their official interviews, students were required to do research on the culture of the location their subject was from. This information was then used to create an infographic as a second part of the final project.

As the final step, they had to take photos of their subject in a set-up portraiture studio in the school. Subjects were asked to bring objects that held substantial meaning to them, and these objects were incorporated into the photos.

All three elements of the assignment were displayed during the Exhibition of Learning on Dec. 4, representing the end to a project that lasted over four weeks. Students were able to present their work to the public and talk about what they gained through the experience.

“My favorite part of this project was definitely the interviewing process,” sophomore Lily Aronson said at the exhibition night. “I already knew my subject because she lives in my neighborhood, so it was really cool to get to know her better and in a different way.”

Baltzell said his students were able to develop their time management, collaboration, interviewing, and photography skills during this project. Beyond the basics, his goal is that they also acquire compassion and genuine understanding of others.

“Above all, I just hope that the message at least resonates with students and throughout the building to just see each other as human beings,” he said. “I hope they understand that no matter what country we come from or culture that we represent that we’re all human, and that our stories deserve to be told, listened to and celebrated.”