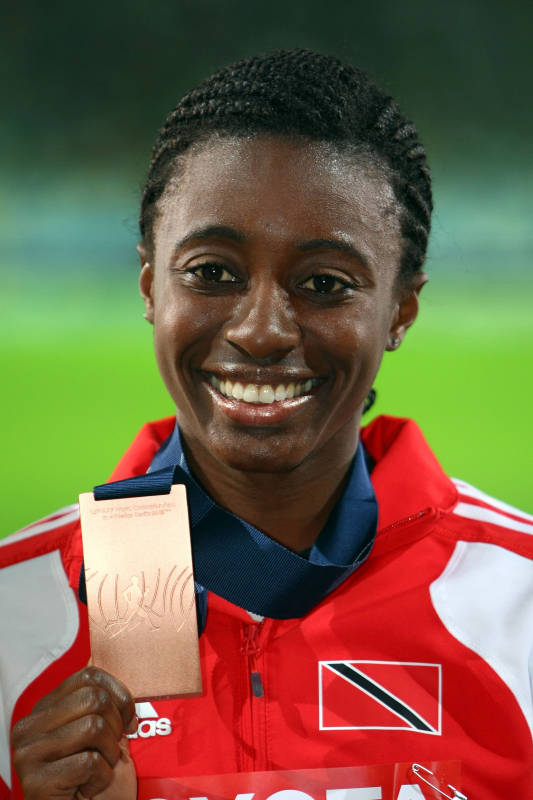 Athletes can gain meaningful lessons by being coached by Josanne Lucas, who has been coaching Track and Field and teaching science for two years. Her athletic journey had a different start than most of her athletes, and her experiences allow her to help them grow while she shares what she has learned over the years.

Lucas is from Trinidad and Tobago, a country in the Carribean just northeast of Venezuela. It is limited in resources for athletes compared to the United States and although sports were required for everyone where Lucas went to school, the fields were small and her dad had to build hurdles out of PVC.

“There were just three schools that had hurdlers in the entire nation,” Lucas said. There weren’t many kids in her races, which pushed her to move on to bigger challenges.

Even with competitors in short supply, the school system motivated students to get as many races in as they could and do the best that they could. Even teachers would run because sports were such a big focus of Lucas’s school.

When she chose hurdling, Lucas’s strategy was that there were not many people doing it, and she kind of had a knack for it, so it was her best avenue to get a scholarship once she saw that as an opportunity.

“From the moment I realized that there was a possibility to get a scholarship and I was in high school, I was just completely focused on school and training and performances. I even competed over the summer,” Lucas said. “So while my friends would be off doing fun stuff in the summer, I was still training and competing.”

She really tries to encourage her athletes to do the best for their future but also to have fun now because the one thing Lucas regrets is being too serious while travelling.

“The first couple years I was just strictly like, track, hotel, home,” Lucas said. “I didn’t really do anything else.”

Lucas wants her students to enjoy the experience and not always be moving on to the next goal. She is glad she realized the moments she was missing while she was focusing on the hard parts.

The more stressful experiences have helped Lucas know where her own limits are and to be mindful of her athletes’ limits. Stress and pressure was a huge influence in her performance whether it was from her coaches, family, or community because they could not always see the bigger picture.

The coaches she works with now are always sure to be mindful of how far to push athletes because they know the physical and mental consequences, which Lucas has experienced firsthand.

“In my career I know how drastic it could be to get injured,” Lucas said. “So all the coaches are mindful of injury and injury prevention.”

Lucas tries to teach her students to weigh the consequences of either slowing down or suffering a career ending injury.

One of the biggest challenges she faced was getting past tough situations and she employs the answers she found in her work with students and athletes on and off the field.

Lucas strives to help her athletes answer such questions before they become too life-changing, so they can more easily balance their lives as she tried to do.

“I’m certainly proud of navigating the role of being a student athlete,” Lucas said.

Being a student athlete took hard work, and she wants to help her students and athletes navigate that path.

Lucas expects her athletes to challenge themselves to balance their lives, but also by training around other good athletes because practicing in a competitive environment was enriching for Lucas’s success.

“If you could be around people who are better than you, you know, have some of the same goals, then you’re going to improve,” Lucas said. “If I train with people who are a lot slower than I am, then I eventually get slower.”

And she does her best to hold her athletes to those expectations to encourage them to look beyond just being the fastest or strongest on the team. The coaching Lucas offers is a demonstration of her experience competing as a professional athlete and she shares her experience to coach them in all aspects of their athletic journey.